Posted on May 3, 2017 by Andrew Bulieris Leave a comment 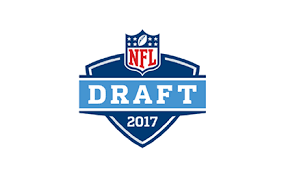 The 2017 NFL Draft was one of the most unpredictable and wildest drafts we have seen in years. The Cleveland Browns sat at the top of the board with the number one pick in the draft selecting the best overall player in the draft, Myles Garret from Texas A&M. This year’s draft featured the most draft day trades in the history of the NFL Draft. The old record for most trades during the draft was thirty-four; this year’s draft featured thirty-eight, breaking the record by four trades. As most analysts stated, this year’s draft was the most unpredictable we have seen in years.

The first overall pick was probably the most predictable moment of the entire draft. For months, analysts and teams knew that the Cleveland Browns would be taking Myles Garret with the first overall pick. After that pick, it became one of the wildest drafts starting with the very next pick as the Bears traded up from the third pick to the second overall pick to pick UNC quarterback Mitchell Trubisky. Everyone had an idea that a team would trade up for the Tar Heel quarterback, but no one expected it to be the Bears. In fact, the three biggest surprises of the opening night of the draft all involved quarterbacks. After Trubisky, the next quarterback to be taken was at the tenth overall pick when the Kansas City Chiefs traded up from the twenty-seventh overall pick to select Patrick Mahomes from Texas Tech. The next trade, possibly the most popular of the night, came two picks later when the Houston Texans traded up thirteen picks to select Heisman Candidate quarterback Deshaun Watson, quarterback from Clemson. If anything was proven at the draft this year, it is how much teams truly value quarterbacks in the draft.

Another major storyline this year is how much off the field issues can severely affect a player’s draft stock. Many examples were displayed as first and second round talent dropped. Players like Reuben Foster and Jabrill Peppers draft stocks were majorily affected due to failed drug tests; Foster, a top-5 talent, fell all the way to pick number thirty-one. Players like Joe Mixon, Caleb Brantley, Gareon Conley, and Dede Westbrook were under the spotlight for being involved with Domestic and Sexual Assault cases, showcasing how much off-the-field concerns can affect your draft stock. Joe Mixon, who some called the best running back in the draft, saw his draft stock plummet after a video was released of Mixon striking a female; he was luckily selected in the second round by the Cincinnati Benagls after being given a second chance by the orginization . Caleb Brantley, a first round talent, fell into the sixth round after being arrested and being accused of knocking a woman unconscious. Questions were raised all around the football world if these players should even be drafted, better yet even be allowed to play in the league itself. Patriots owner Robert Kraft came out and publicly gave reasoning behind why the organization would not select Mixon or Brantley stating,” While I believe in second chances and giving players an opportunity for redemption, I also believe that playing in the NFL is a privilege, not a right. For me, personally, I believe that privilege is lost for men who have a history of abusing women.”

With the most draft trades in NFL draft history and players rising and falling down draft boards, the 2017 NFL draft quickly became one of the most unpredictable drafts in years. The draft was also held in Philadelphia this year, giving a change of scenery to the draft world. It was a very positive change as the audience for the draft had never seemed more excited and energized for each and every pick, which was generally well appreciated around social media. All NFL fans can hope and pray we see these kinds of drafts again for years to come as this year’s draft was surely a good one